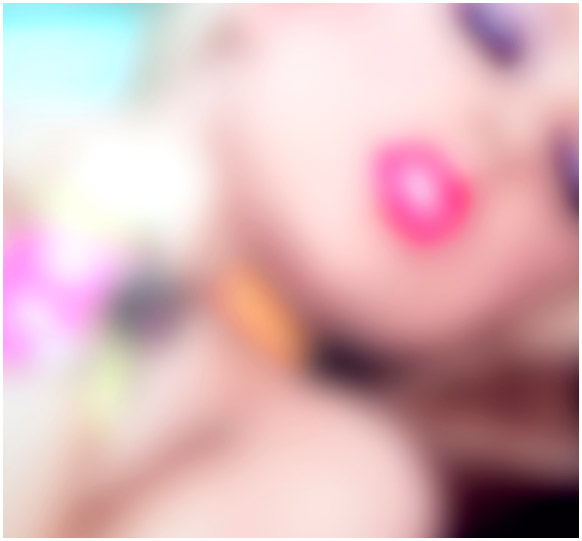 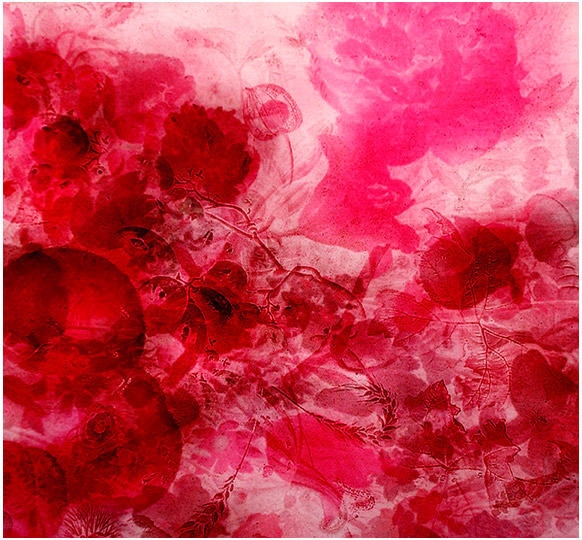 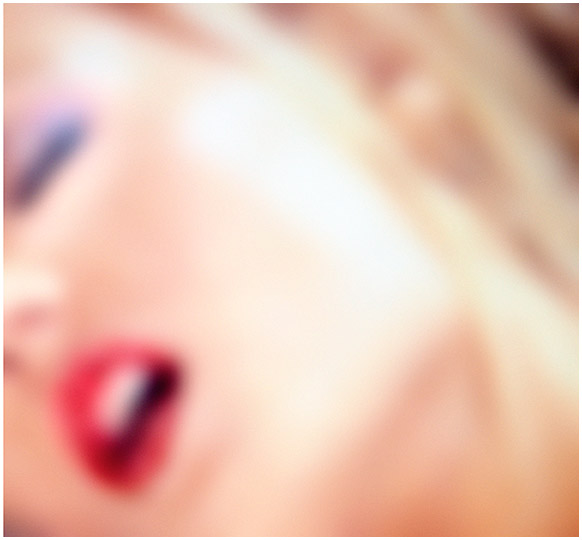 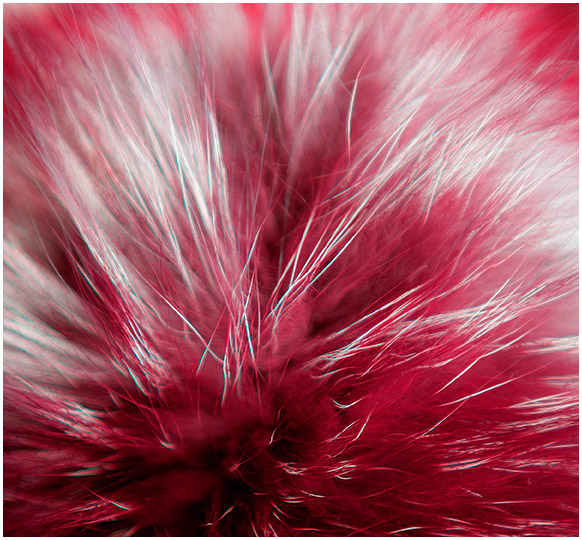 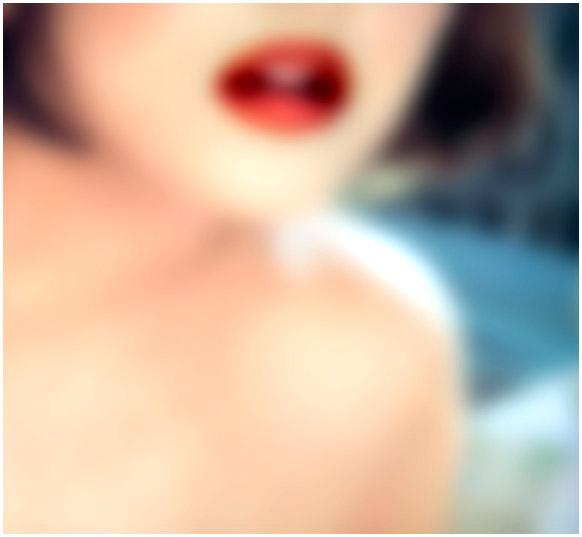 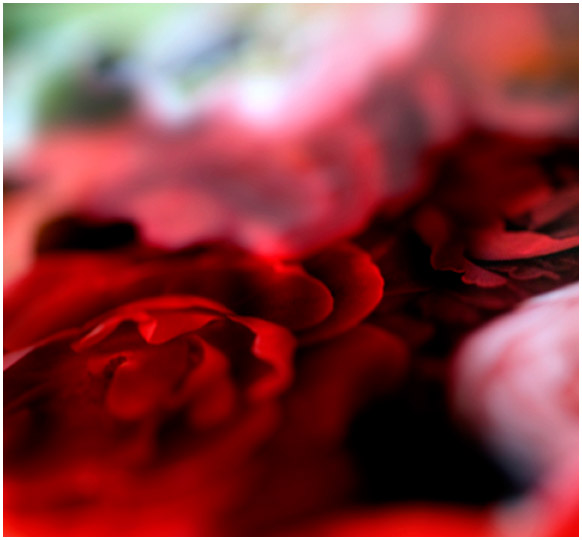 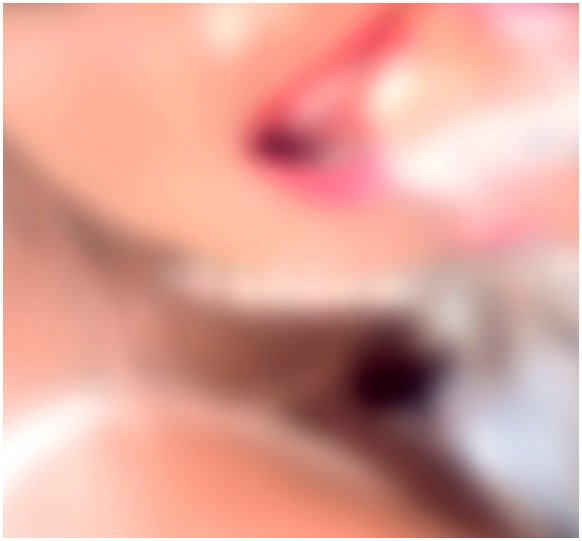 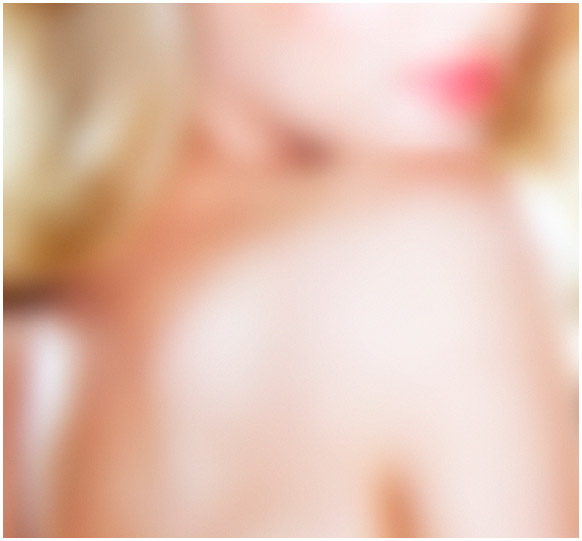 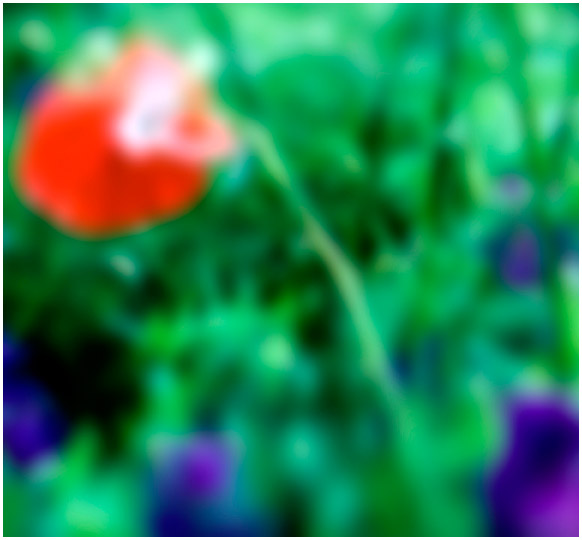 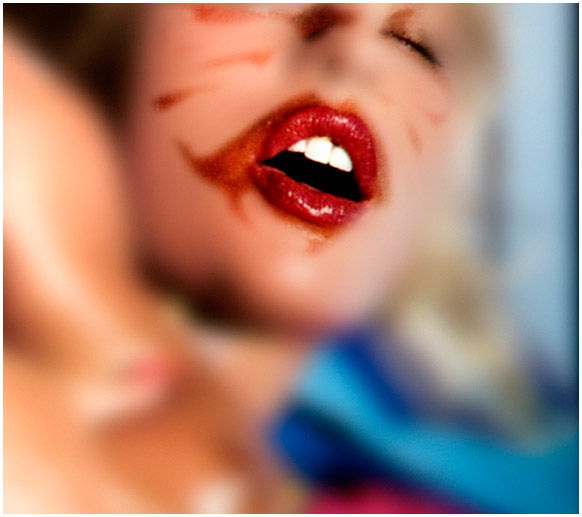 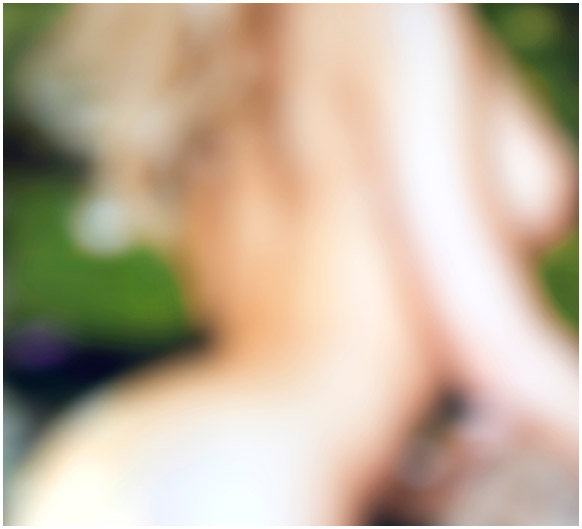 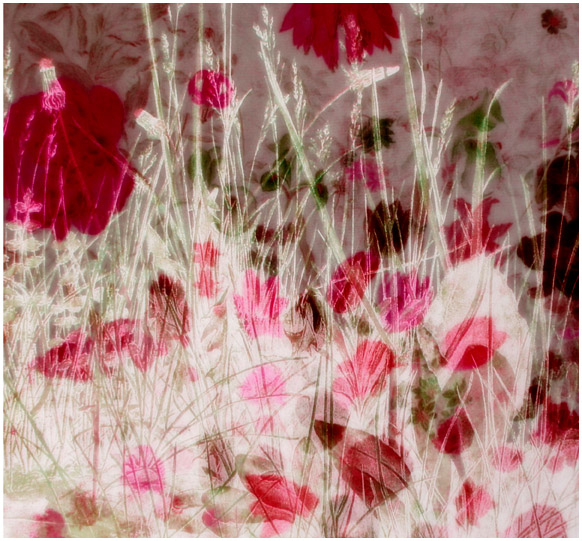 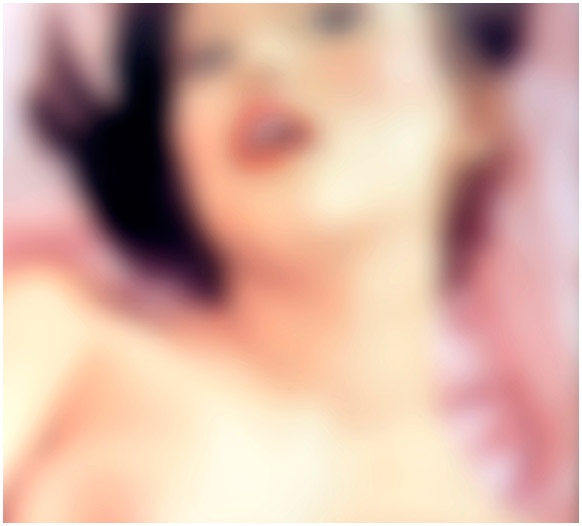 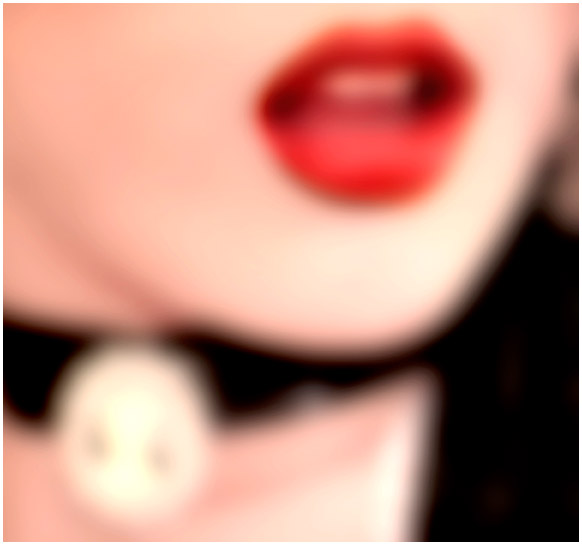 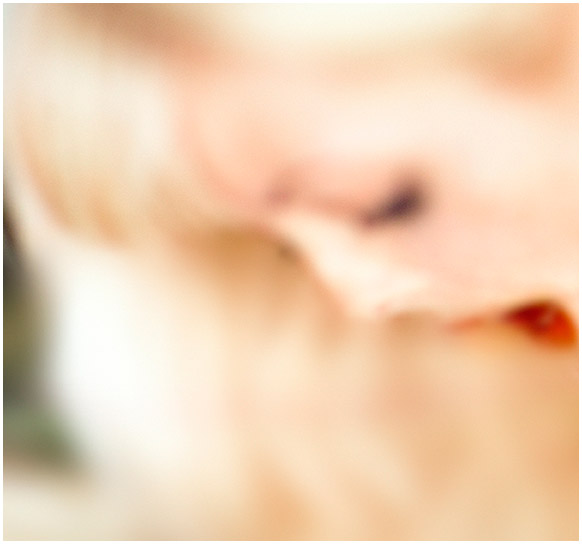 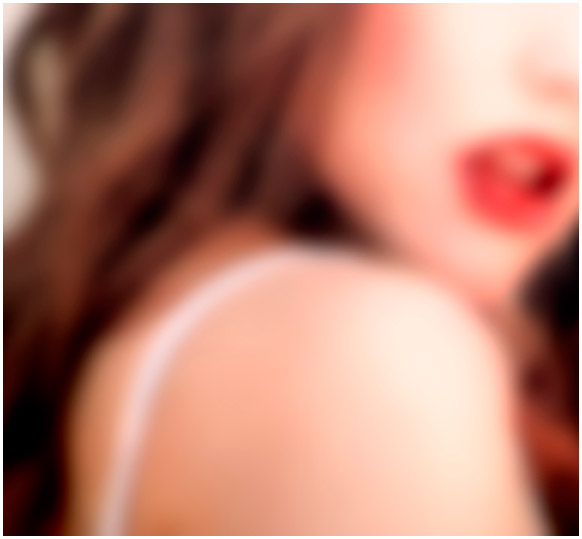 She Coloured Her Lips With Red Crayon 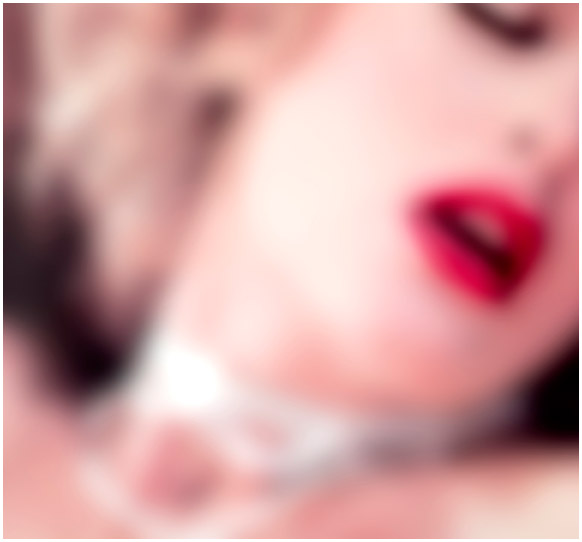 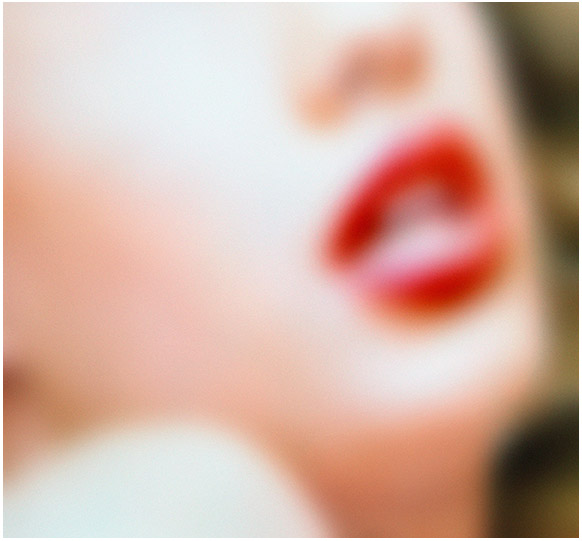 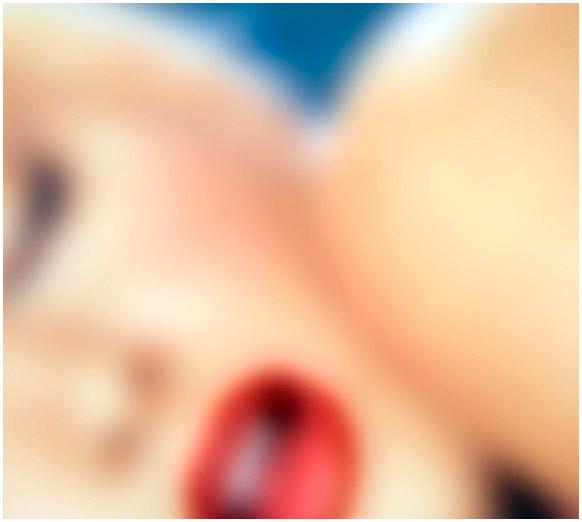 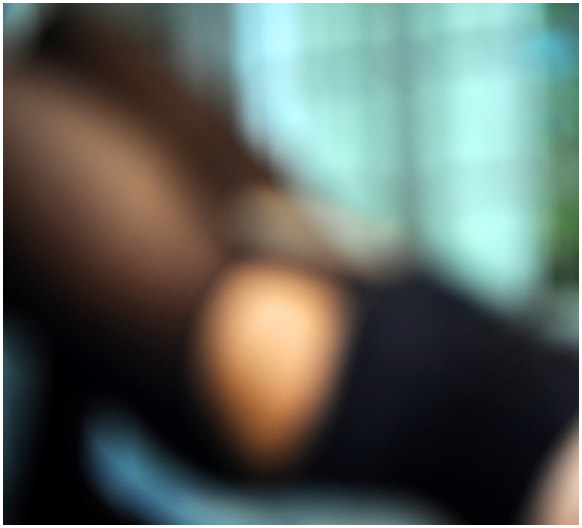 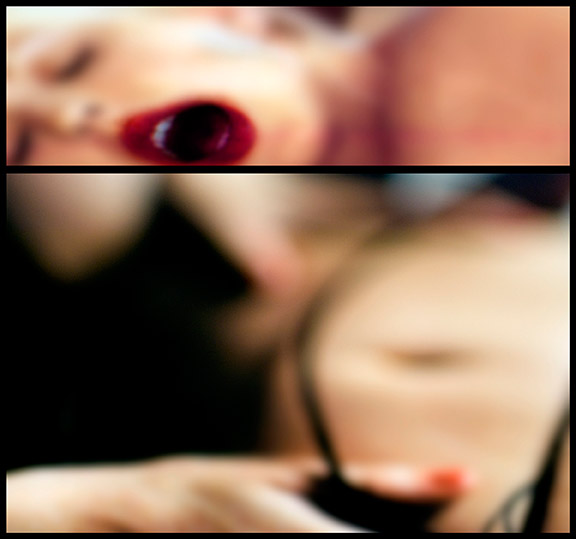 A Pattern of Ecstasy and Madness

He felt himself grasped by his long lapels, pulled forward and pushed back, as a creature with a hundred mouths started sucking the marrow from his bones. She said nothing as she came on like a starved animal, and he wouldn’t have known who it was if it hadn’t been for the taste of her watermelon gum, which after the first few torrid kisses he felt himself chewing. Even though that lightning attack lasted only three minutes it left it’s mark on him. He spoke of it as one might of a religious experience, a visitation or vision, any rupture into this life from beyond that cannot be described in words.
–Jeffrey Eugenides, The Virgin Suicides

Lurid began as a conversation. In the summer of 2007, as my boyfriend and I sweltered in the Southern Californian landscape, as we discussed art, and life and politics, he said something like this: “I’d like to see what kind of images you would make about sex.” I was intrigued by his suggestion. It had never occurred to me to create work about sex; I created work about Death. Both the challenge and the symmetry appealed. So, as the sun beat down, and forest fires blazed up; as coyotes appeared like apparitions in the backyard, and ash settled over the landscape; as citrus trees sagged, and snapped, under the impossible weight of galaxies of bursting fruit; against this apocalyptic backdrop; I began to photograph sex, or as it turns out, Desire.

I know a little about sex and desire because, well, I’m human. And because for four blissful years I lived in Las Vegas: where lavish, sensual indulgence, and intoxicating, lurid, sensual excess reigns supreme. As I began to make images, I drew from this past. I also looked at pornography, and fashion, and film. The first image that I made that I was happy with was an image of a mouth: red lips, swollen and soft, gently parted in surrender to desire. I developed a kind of crush on this image. And like a teenager playing her favorite song over and over, I began to make image after image of gloriously gauzy sirens, heads thrown back in a delirium of desire.

I love the fact that sexual and religious transportment echo each other. How Ecstasy, that elevated sensation of bliss, is simultaneously carnal and spiritual. Bernini’s The Ecstasy of St. Teresa (her head is thrown back, face upturned towards the heavens, lips parted, eyes softly closed–so similar to my own carnal angels) is based on the swooning nuns own writing: “I saw in his hand a long spear of gold…He appeared to me to be thrusting it at times into my heart, and to pierce my very entrails; when he drew it out, he seemed to draw them out also, and to leave me all on fire with a great love of God. The pain was so great, that it made me moan; and yet so surpassing was the sweetness of this excessive pain, that I could not wish to be rid of it.”

Of course many of my Venuses are distinctly modern (perhaps a little trashy) more like Lux Lisbon or Lolita, Marilyn Monroe or Jenna Jamieson than St. Theresa. This has everything to do with the lush and lurid colours; the hot pinks, the electric purples, the glittering golds, and the verdant greens–these sirens are rendered in. Colour, trivial, dangerous, vulgar, superficial, is always feminine. Finally, a sudden rush of colour is a drift into a dream state, a drugged state; a descent (or ascent) into a world of desire.